What is GPS: Getting Started

The Global Positioning System (GPS) is a satellite-based navigation system made up of a network of 24 satellites placed into orbit by
the U.S. Department of Defense. GPS was originally intended for military applications, but in the 1980s, the government made the system available for civilian use. GPS works in any weather conditions,anywhere in the world, 24 hours a day. There in no subscription fee or setup charge to use GPS.

GPS satellites circle the earth twice a day in a very precise orbit and transmit signal information to earth. GPS receivers take this information and use triangulation to calculate the user’s exact location. Essentially, the GPS receiver compares the time a signal was transmitted by a satellite with the time it was received. The time difference tells the GPS receiver how far away the satellite is. Now, with distance measurements from a few more satellites, the receiver can determine the user’s position and display it on the unit’s electronic map.

Once the user’s position has been determined, the GPS unit can calculate other information, such as speed, bearing, track,trip distance, distance to destination, sunrise and sunset time and more.

How accurate is GPS?

Today’s GPS receivers are extremely accurate, thanks to their parallel multi-channel design. GARMIN’s 12 parallel channel receivers are quick to lock onto satellites when first turned on and they maintain strong locks,even in dense foliage or urban settings with tall buildings. Certain atmospheric factors and other sources of error can affect the accuracy
of GPS receivers. GARMIN GPS receivers are accurate to within 15 meters on average.

Newer GARMIN GPS receivers with WAAS (Wide Area Augmentation System) capability can improve accuracy to less than three meters on average. No additional equipment or fees are required to take advantage of WAAS. Users can also get better accuracy with Differential GPS (DGPS), which corrects GPS signals to within an average of three to five meters.The U.S. Coast Guard operates the most common DGPS correction service. This system consists of a network of towers that receive GPS signals and transmit a corrected signal by beacon transmitters. In order to get the corrected signal, users must have a differential beacon receiver and beacon antenna in addition to their GPS. 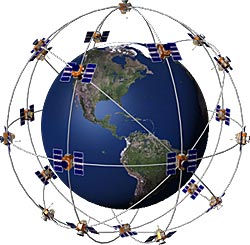 The 24 satellites that make up the GPS space segment are orbiting the earth about 12,000 miles above us. They are constantly moving, making two complete orbits in less than 24 hours. These satellites are travelling at speeds of roughly 7,000 miles an hour.

GPS satellites are powered by solar energy. They have backup batteries onboard to keep them running in the event of a solar eclipse, when there’s no solar power. Small rocket boosters on each satellite keep them flying in the correct path.

Here are some other interesting facts about the GPS satellites (also called NAVSTAR, the official U.S. Department of Defense name for
GPS):

GPS satellites transmit two low power radio signals, designated L1 and L2. Civilian GPS uses the L1 frequency of 1575.42 MHz in the UHF
band. The signals travel by line of sight, meaning they will pass through clouds, glass and plastic but will not go through most solid
objects such as buildings and mountains.

Ephemeris data, which is constantly transmitted by each satellite, contains important information about the status of the satellite (healthy or unhealthy), current date and time. This part of the signal is essential for determining a position.

The almanac data tells the GPS receiver where each GPS satellite should be at any time throughout the day. Each satellite transmits almanac data showing the orbital information for that satellite and for every other satellite in the system.

Factors that can degrade the GPS signal and thus affect accuracy include the following:

Mapping: Where am I

Have you ever looked at a map and wished you could pinpoint your exact location? Are youor is someone you know “directionally challenged”? Ever find a great hunting or fishing spot and want to get back to it easily? A GPS unit may be just what you need to know where you are and where you are going. GARMIN units are available with different types of map data. Models vary from having no map, to a basemap,to a highly detailed map./p>

* Reprinted with permission of Garmin International.

Central is an Authorized Garmin Dealer.